A weekend of idleness in Berlin

I have impressed myself by how much time I can spend not doing much at all. In nice weather, and sometimes even on a rainy day, my idleness takes on a forward motion as I wander up and down streets, pausing here and there, going nowhere in particular. A month ago, I read Flâneuse: Women Walk the City in Paris, New York, Tokyo, Venice and London by Lauren Elkin. When the author boldly stated in the beginning, “a culture that does not walk is bad for women,” I felt the reason for my rambling wanderlust come into focus.

Recently, I had to make a trip to the American consulate in Berlin, which was a good enough reason as any to stay for a weekend of flânerie, which is, as Wikipedia describes it, “the act of strolling, with all of its accompanying associations.” I had been to the city four years earlier and saw the main highlights. But since moving to Germany, the capital took on a new interest and I wanted to explore more of it by foot. Elkin describes in her book:

“Walking is mapping with your feet. It helps you piece a city together, connecting up neighbourhoods that might otherwise have remained discrete entities, different planets bound to each other, sustained yet remote. I like seeing how in fact they blend into one another, I like noticing the boundaries between them. Walking makes me feel at home.”

This visit to Berlin offered me a chance to make the terrain feel a bit more like home.

I had a few hours between my bus arriving in the city and when I could enter the consulate. I surveyed the nearby area on a map and found a nature reserve only one tram station away from Südkreuz, called Natur-Park Schöneberger Südgelände. After storing my heavy backpack in a locker, I was at the park within five minutes. It had just rained, so everything looked bright and smelled like dirt in the best way. As it was still early, I was one of few people walking around.

When you walk in, a big yellow wall greets with you the saying “Die Kunst ist der nächste Nachbar der Wildnis.” (Art is the next neighbor to wilderness.) You can read about the history of the place on signs near an intersection in the park where a restaurant, theater, and sculpture garden meet. The land was a switching yard for trains from the late 1800s until 1953, when it stopped operations and nature reclaimed the place. Then in the 90s, the city of Berlin purchased the area and turned it into a nature reserve, saving the many species of plants and animals that flourished there. Railway yards are an important place for biodiversity, as it turns out, as critters and seeds are common stowaways. Walking through the forested parts, you can still hear the sound of the tram running nearby, which adds to the ghostly feeling of the former industrial landscape. Look closely and you can spot rusted train machinery in the bushes. Rails from a track had separated and were stuck mid-descent down a slope. On the south end, I spotted what looked like a gigantic faucet that nearly blended into the trees. Moss climbed over a haphazard pile of bricks. All of this curiosity made me walk slower.

I was not quite ready to leave this park when I had to leave for my appointment but felt like this urban woodland gave me the proper start to a weekend of wandering. During the metro ride to the consulate, I was suddenly surrounded by an older German man leading a small group of Chinese tourists who explained, “There are three million people living in Berlin. One hundred thousand of them are criminals. That’s three percent!” To which the tourists knowingly nodded their heads. 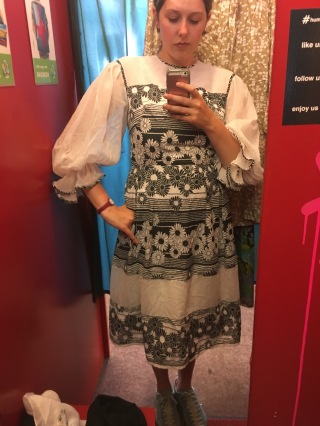 The only vintage dress that fit my 21st-century body

After the consulate visit, I retrieved my bag from the locker and headed instinctually in the direction of a five-story thrift store in Friedrichshain I had spotted on the map. One of my favorite things to do when I travel is to browse the thrift stores. Usually I find a unique picture about the people that live there. But I have to admit, this time I was disappointed. Besides one level dedicated to vintage clothes, the rest of the inventory was dominated by barely-used, hardly-loved fast fashion. Although I am aware of this sad development, I was disheartened that such a large selection in a big city didn’t have more variety. My back began to feel the weight of my what I was carrying, so I gave up and made my way to my accommodations for the weekend.
I started the second day early in the morning at a market, where I stocked up on a quiche, carrots, and apples for lunch later, before I moved on to a general idea of a destination. During this trip, I felt like I spent about half the time on public transportation. Berlin is big, and I knew that if I wanted my feet to last the whole weekend, I should reserve as much energy as possible moving around. Subways, trams, and busses offer just as much opportunity for idleness and observation as walking the streets. I saw two different women pull out a torn-out page from a newspaper to read on their ride, rather than carrying the entire issue with them (I’m guessing). I didn’t know people did that.

Shortly after getting off the tram in Kreuzberg, I walked by a big art supply store. Truly my mother’s daughter, I could not pass up an opportunity to add a souvenir pen or notebook to my stock. What I thought would be a quick stopover turned into an hour-long tour of the latest art supplies. I considered (for a very long time) buying the materials to make my own macramé lamp. But in the end, I decided on a yellow pen, a pencil with multiplication tables printed on it, a tiny pencil sharpener, an eraser, and a new pencil bag.

From there, I headed across the street to the Prinzessinengarten, which I had learned about in a reading exercise in my German grammar book. It was an oasis in the city. Hundreds of plastic crates-turned-planters were stacked in organized rows. Bee hives buzzed quietly in one corner. The food in the outdoor café smelled wonderful, which almost made me regret the lunch I had brought along. After taking in all of the gardening projects, I sat down for my second cappuccino of the day, not quite ready to leave, and read my book at a table in between trees.

By this time, I recognized the satisfying freedom to be able to make even the smallest decisions by myself. I didn’t feel guilty taking so long in a store. When I spotted food that looked delicious, I stopped. I took several coffee breaks. I didn’t have to worry about a companion judging me for stinginess or walking too fast or feeling tired. When I’m exploring a city with another person, I always hesitate before suggesting something, or think of four alternatives to my suggestion in the event that my partner isn’t on the same page. This time, I didn’t have to do that.

“Why do I walk? I walk because I like it. I like the rhythm of it, my shadow always a little ahead of me on the pavement. I like being able to stop when I like, to lean against a building and make a note in my journal, or read an email, or send a text message, and for the world to stop while I do it. Walking, paradoxically, allows for the possibility of stillness.”

That opportunity for stillness, in fact, allowed me to keep moving and exploring the whole weekend.

I next headed towards a book store someone had recommended me. I had entered this book store unprepared, not knowing what I was looking for, squeezing past people in the small aisles attempting to browse. Although the chairs were empty and inviting, I started to feel dizzy from heat, so I left for some fresh air and shade. I have done this solo-walking-around gig enough times to know that around hour 36, I start talking to myself. “You’re tired. You need to find some shade to sit down in. Take a break before you collapse.” I talked myself into a tea and cookie at a nearby café, where I read more of the book I had. On my way home, I purchased a shirt in a smaller thrift store and picked up some special beers for my hosts, feeling somewhat vindicated for the previous day.

Whenever I find myself in a big city, I try to take the opportunity for a full breakfast in a café. As I wanted to check out the flea market at Mauerpark before my bus home, I found a place nearby that served the usual eggs Benedict fare I was missing. I usually don’t like eating by myself in restaurants. However, by this time in the weekend, I cared a lot less about being alone – even when I was seated on a couch (surrounded by tables) facing the door, greeting everyone that walked in. Nothing could stop me from my poached eggs and hollandaise sauce. Plus, I was becoming more and more satisfied with my book as a mealtime companion. I didn’t have to make small talk. I could put it down mid-sentence if I wanted to. The eggs arrived, it was delicious, and thus I was ready to get the most of my last few hours in the city. 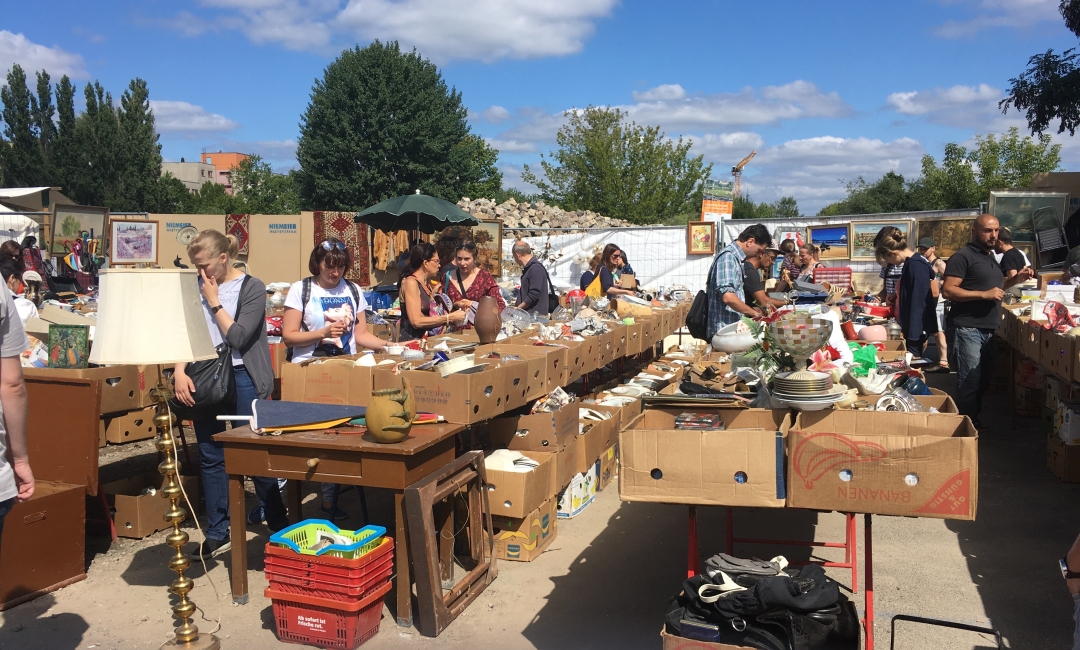 On my way to the flea market, I spotted a few metal posts, with text and photos, which turned out to be a part of the Berlin Wall Memorial. I made a mental note to come back to these after the market and joined the horde of people streaming into the gates. This market was full. I walked up and down the aisles of stalls, surveying the kinds of stuff people were selling, rarely stopping. It was hot. I was tired. Eventually it dawned on me that even though I love flea markets, I didn’t want to be there.

After picking up some food for my ride home, I wriggled my way out of the crowd and walked back to the memorial. There were just a few others reading the sign. I overheard a tour guide to a small group describing how some of his own family members still carry the mentality of a separated Germany. The information was powerful and pictures even more so. One showed a picture of a couple standing on chairs, holding up their children so their family in East Berlin could see over the wall how much they’ve have grown. I wandered down the pathway (which traced where the wall stood) and read about people who had died trying to escape. Once again, I was reminded of the foolishness of dividing people with walls. 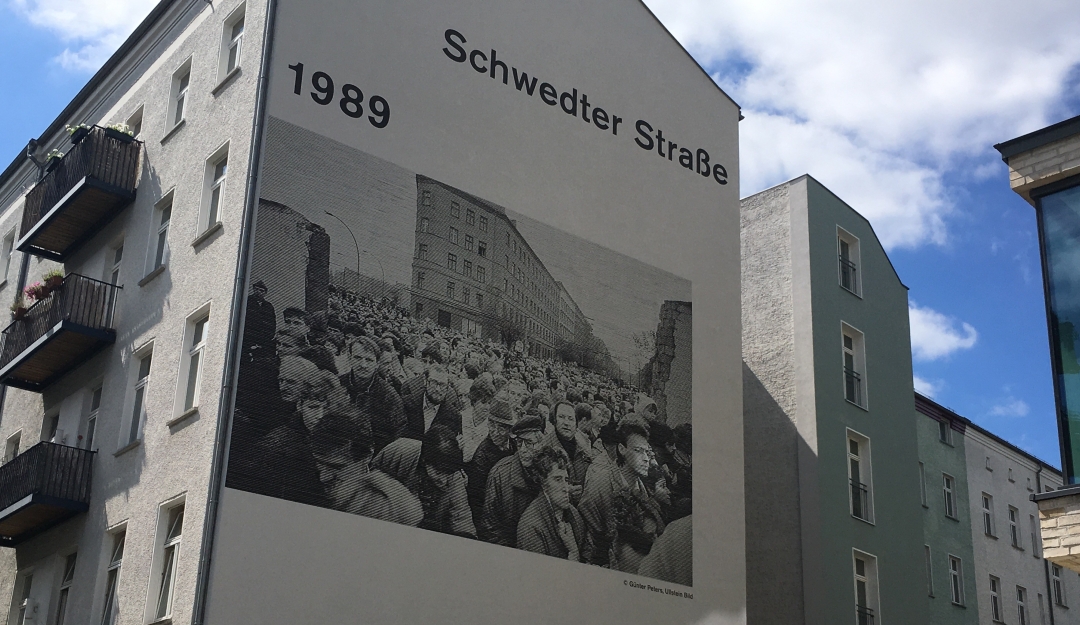 By noon, I was ready to leave on my bus home. My body started to feel the wear of three days of walking. I checked an app on my phone to see that I had walked over 50,000 steps during the weekend. I reflected on the distances I easily travelled between neighborhoods, how good it felt to move around by myself, and the new perspectives I saw of the city. I am really grateful for this freedom to roam. Elkin warns in her book, “Beware roots. Beware purity. Beware fixity. Beware the creeping feeling that you belong. Embrace flow, impurity, fusion.” So, I keep moving and exploring.

I am a native English editor and trainer based in Leipzig. I believe language can be tricky, but it can also be a lot of fun! I love to help people get their message across clearly and confidently.